3ds Max is relatively new to me and I’m very much used to the way maya does a lot of things. To get an animated texture to work in Maya, you simply make a material and assign an image sequence or movie to it. Max also does this but there is a snag.

When importing an animated texture in either package, the default is to sync the texture’s animation with the scene’s time slider. For the particular project I’m working on, I need to to have the frames of the  texture controlled by a control in the rig so the animator can play with it (the texture in this case being the pupil of a cartoon eye). Max’s bitmap has no way of reconnecting the active frame of the texture. There was once a plug-in to achieve this feature, but it’s not compatible with 2008. Running out of time, I came up with a ghetto solution that still does the trick.

Instead of importing an .ifl sequence, I instead used a multi-material which is basically a material containing multiple materials. In my case, each sub-material is instead a single frame of the texture animation. 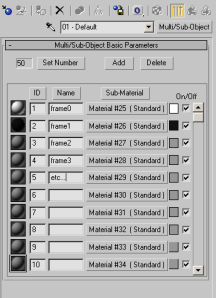 To make this solution a bit elegant, link the Material modifier’s attribute to a custom parameter. Thisway , limits can be specified and the animator wont have to scrounge through the modifier stack in order to animate.

This entry was posted in tips and tutorials and tagged 3ds Max, hacks, rigging, tips, tricks, tutorial. Bookmark the permalink.