Hard games can be fun and very immersive when done right. Do “Game Over” screens get in the way of fun?  With the progression of technology and proven designs showing how much more fun a game can be without this element, why do games continue to use ‘Game Over’?  The additional menus and loading times can take the player out of the experience and force them to quit prematurely. Maybe it’s time for them to go…

I read an interesting article this past week from indie game developer Edmund McMillen regarding game difficulty and fun factor.  Of the points that made about the difficulty tuning in Super Meat Boy, the one that resonated the most with me is his second point: keep the action constant.  To paraphrase, when the player dies in the game, the character respawns instantly with no downtime between death and restart.  The goal is to maintain the pace of their game, a hardcore platformer where death is part of the learning process, via minimizing the time to restart on character.

It was imperative that the action never stopped, even when the player was killed. The time it takes for Meat Boy to die and respawn is almost instant, the player never waits to get back into the game, the pace never dropps and the player doesn’t even have time to think about dying before they are right back where the left off. This same idea was applied to the level progression, the player never leaves the action till they want to, the levels keep coming as fast as the player can beat them, and all the complete screens, transitions and cut scenes are sped up to keep the fast pace of the game flowing. –Edmund, “Why am I so… Hard?” 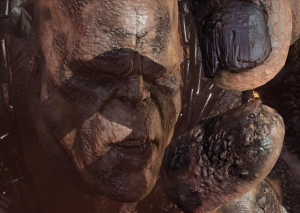 I like hard games a lot, but I do find some games frustrating, and some hard games not frustrating at all.  I immediately began to wonder if Game Over screens play a large role in frustration, and diminish the fun that can be had from completing a challenging game.  After reading this, I reflected on a conversation I had with a coworker about God of War 3.  He was interested in playing it and I let him borrow my copy since I just finished the game on Titan (Hard) difficulty and wanted to move on to other games.  When I loaned it to him, I recommended that he play it on the same difficulty; some online reviews made the same recommendation.

The next day, the same worker came back to me and told me he found the first boss of the game (Poseidon) frustrating and decided to play through the game on Normal.  I asked why he found the experience frustrating considering how much he loves Demon’s Souls, a game far more notorious for its difficulty.  His reasoning was the game over process annoying. In God of War 3, there’s a game over screen with a yes/no menu for restarting.  When you die consecutive times, the game over screen brings up a second menu asking if you want to switch the game to Spartan (Easy).  The first game I remember introduce this feature is the first Devil May Cry.  It’s meant to be more of a joke than a feature, and other action games adopted the scheme, including Ninja Gaiden and God of War.  My coworker didn’t share the same sense of humor, and often second-guessed if he accidentally clicked “Yes” when the game prompted for Easy mode.

At this point, dying completely removes him from the actual game.  Instead of reflecting on his mistakes or a possible strategy, he has to first make sure he properly navigates the game over screen.  This is a complaint I heard from many people playing such games, dying becomes a chore in itself, the game constantly insinuates that you may be out of your league, and the learning experience is diminished.  Edmund mentions that a penalty for dying plays a major role in the formula for game difficulty:

(% chance the player will die) X (Penalty for dying) = Difficulty?

Edmund mostly relates the formula to platformers, but I think it can apply to just about any genre of video game as most games have some sort of failure element.  Wasting the player’s time with unnecessary screens or insulting their efforts isn’t a good way to penalize the player for dying or failing.

Prince of Persia's Elika doesn't believe in Game Over, or bad hair days.

Prince of Persia (2008) is an action game that’s considered “easy”.  Though PoP ‘08 puts a larger emphasis on platforming, combat still plays a major role.  The criticism about lack difficulty stems from the fact that the player can never “die” in Prince of Persia.  The main character is accompanied by a female named Elika who assists the main character in throughout the game.  Whenever the player falls off a ledge or an enemy is about to land a fatal blow, Elika is always there to save the player from doom.  I disagree that this element makes the game easy, and I see it as one of the best parts of the game.  Whenever Elika saves the player from a fall, she drops the player at a “checkpoint”, usually the last area of stable ground the player traveled.  In battle, Elika saves the player by pushing the boss away with magic, and the player is revived with about half their total health, but the boss completely regains any health loss from the player’s attacks.  This process sounds very similar to dying in other games, except there’s no actual death involved, plus its automated, so the player’s only duty is to reflect on their failure.   The player cannot exploit Elika and use attrition tactics to advance the game, but instead, must learn from past mistakes and figure out the winning strategy.  The Elika factor streamlines failure and the player is never pulled away from the game unless they’re ready to stop.

You are already dead. Too bad you're not already loading your next try.

Dying at any point in God of War 3 multiple times brings up the Spartan (Easy) option in the menu, even if the player were to die during a platforming segment, the prompt appears (a dubious feature, considering Spartan has no impact on non-combat segments).  Dying in Demon’s Souls is also artificially more annoying than it needs to be. In Demon’s Souls, when the player dies, unspent souls (the games principle form of currency) are lost and the player also loses his/her “body”.  This is actually a neat feature, as it adds risk to questing without punishing the player too much (when the player doesn’t have a body, they become a “soul”, where their character has less starting health but more attack power). The annoying part comes in the actual process of dying.  When the character dies, a lengthy “You Died” graphic appears and is followed by an even lengthier loading screen.  If the player has to keep restarting, they’ll inevitably have to leave the world to go repair their gear (extended use can cause weapons and armor to break) and replenish any consumables such as arrows and healing grass; meaning more load times to sit through.  These elements can add a lot of downtime between level attempts and cause added frustration to an already difficult game.

Elika isn’t the first or only example of streamlining restarts.  Trials HD is considered to be a hard game, but most find it incredibly fun to play.  I think a lot of the fun factor comes from how efficient restarting is.  Trials HD is a platformer type game where the player rides a motorcycle through a complex series of ramps, loops, and obstacles. Failure happens whenever the player crashes, and crashing a lot is part of the learning process as the player learns the best way to approach each part of the course.  As soon as the player crashes, they only have to press one button to instantly warp back to a previous checkpoint.

Now's the perfect time to press that restart button I was talking about.

There’s no game over screen, or menus and the player has immediate control of a fresh new bike.  There’s also an option to bail out and restart at any point on the course.  At any point, if the player feels they’re stuck or barreling towards inevitable wipe-out, they can restart right away without having to see it through.  This really helps the pacing of any game, especially Trials, as it keeps the player in constant control of their gaming experience.

This entry was posted in Articles, Main and tagged design, gaming, opinion. Bookmark the permalink.